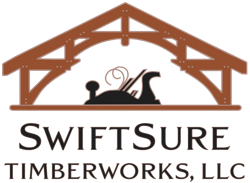 SwiftSure Timberworks’ most recent order was for a heavy timber truss, a ridge beam, and a set of timber hip rafters for a half-octagon ceiling over the living room of Ashen and Katelyn Carey’s new home in Ashland, Oregon.

Integrating heavy timber elements into projects that emphasize the use of natural building materials has been an important goal for SwiftSure Timberworks for many years. In 2011, we provided the timber framing for two Ashland homes that used a formed clay/straw mixture twelve inches thick for their exterior walls.

Katelyn Carey told me that when she and Ashen were thinking about the kind of home they wanted to build on their 24-acre property in the mountains southwest of Ashland, they decided early in the process that the design would be governed by certain key considerations, including:

• Energy efficiency
• Sustainability
• The use of high-quality, healthy building materials 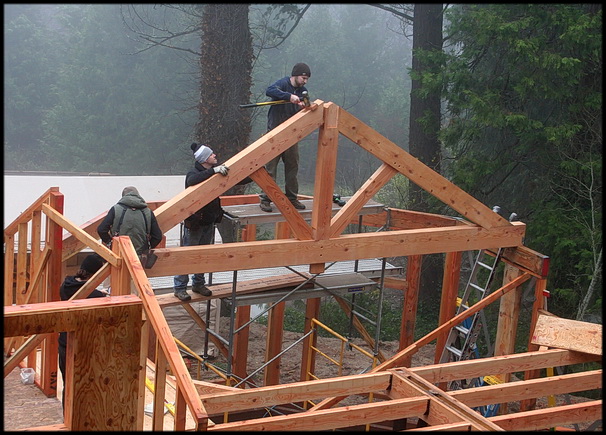 They realized early on that the way the home site was located on the property would pose some constraints on how they approached the question of energy efficiency. For one thing, passive solar strategies such as south-facing windows could be ruled out: to the south, directly behind the home site, was a steep, heavily-forested hillside, and they knew that there were several weeks during the winter when the home site would see no sun at all during the day. On their home site, straw bale construction fit all three primary considerations: straw bales have very high insulation values (energy efficiency), and are a natural building material that contains no toxins and which are harvested every year (sustainable, healthy). Straw bales are also highly fire-resistant, which the Careys felt would be significant benefit on their heavily-forested property.

The Careys had read books like the Not So Big House by Sarah Susanka, and were sold on the idea that designing a house with a relatively small footprint would allow them the budgetary freedom to build a house where their own artistic bent could find expression. Knowing that they wanted an open living space, window seats, and a cozy kitchen, they designed the house themselves at first, and then took their sketches to Chris Keefe, the owner of Organicforms Design in Ashland (organicformsdesign.com) who was referred to them by Andrew Morrison, an Ashland-based builder who shares his expertise with straw bale construction through his website (www.strawbale.com) and through straw bale workshops he teaches all over North America. The straw bale walls for the Carey project will be installed in June, and will be the occasion of one of Andrew Morrison’s workshops.

A Tulikivi fireplace and heavy earthen floors will provide thermal mass to their home’s design, and the Careys estimate they’ll be able to heat their home with a half a cord of firewood each year. To learn how to build their own earthen floors, the Careys took a workshop on earthen floors from Robert and Paula Laporte, the Ashland-based natural building pioneers whose EcoNest building system (www.econesthomes.com) has won enthusiastic adherents all over the country. Claylin Floors of Portland, Oregon taught the workshop, and will be supplying the clay mixture the Careys plan to use for their earthen floors.

The Careys intend to do as much of the work themselves as possible, including the straw bale walls, the earthen floors, finishing, and the earthen plaster on the walls. They’ve hired professional subcontractors for other aspects of the work, including Herb Brower (Foundations), On Point Construction (Framing), SwiftSure Timberworks (Timber Truss), Alaska Masonry (Tulikivi), Applegate Plumbing (Rough Plumbing), Rogue Valley Electric (Rough Electrical), Childress Roofing (Roofing).